I upgraded to the new Retina MBPs and have been loving it so far (minus the random logouts that I’ve now since fixed, or so it seems).

I have a few new purchases to make, such as a 17″ FSI monitor, a 6×6 village blackout tent, and a HDLinkPro with LiveGrade (why does everything have to cost so much?!).

The idea of thunderbolt seemed pretty awesome to be, but I didn’t know what was feasible in terms of compatibility and such, until now.

15.4″ MBP, LaCie TB eSata Hub, TB cables, Sonnet Echo Express PRO express34 adapter, and that’s pretty much it.  I’m getting about 180mb/s read speed, which is pretty awesome.  I can download a 64gb card in about 8 minutes to an eSata enabled hard drive, which is awesome seeing how before from PCIe to fw800 I was doing about 24 minutes. It’ll do a checksum and copy to two different drives in about 15 min, that’s fast.

I was having some issues with my Sonnet TEMPO SATA card, getting it to work with my Echo PRO (as I’m still waiting on my USB3.0 Red Station) but I just ended up swapping out harddrives for each transfer and that seemed to work well.

Here’s a screenshot of the BlackMAgic Disk Speed Test I was getting earlier.  Pretty awesome. 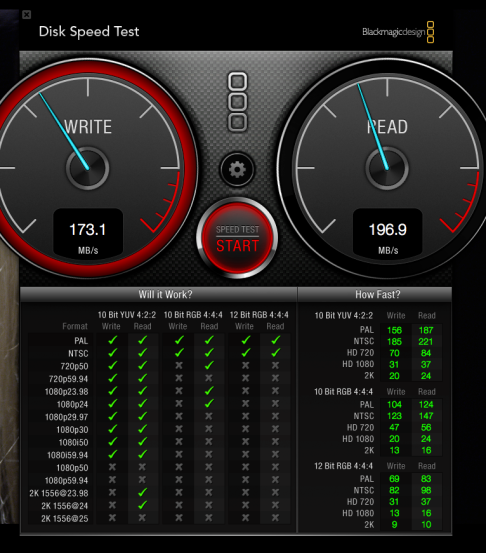 Published by Charlie - Dork in a Tent

View all posts by Charlie - Dork in a Tent